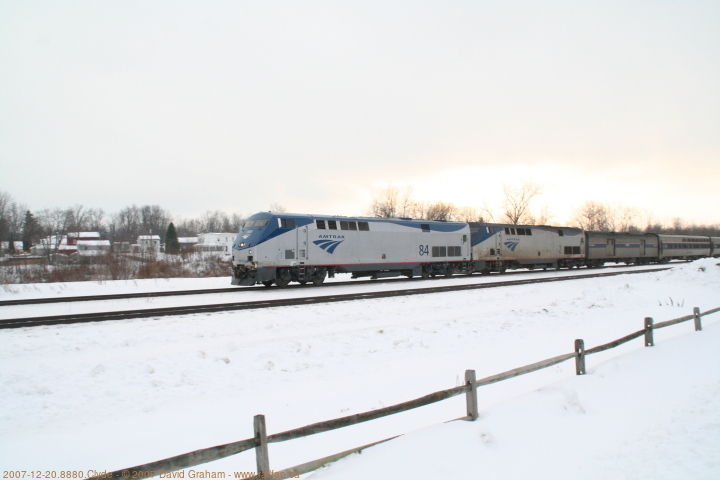 Clyde is just to the east of Lyons on the CSX about half way between Rochester and Syracuse, New York.

We started out from our hotel in Henrieta outside Rochester at the crack of dawn, heading up to Lakeville to see if we could find the LAL working. At that hour there was little sign of life and pretty soon we heard a Rochester Southern train leaving Rochester, so we headed down to Caledonia to get ahead of it, where we waited a fair time for it. It came with 4 units and 70-odd empties around 9:30 after which we headed back to Lakeville. We heard switching as we got closer, and then it abruptly stopped. Hoping for an LAL train to be leaving we headed for a crossing just out of town and sat for a while, eventually going back into town and just missing a switcher... twice. We sat for a while near the yard eventually figuring out the crew had gone for lunch and shot the lone unit parked mostly inaccessibly from a street in town. From there we headed to the Ontario Central in Victor, where we found no signs of life and proceeded eastword to Phelps and north to Newark in the hopes of getting the Ontario Midland. There was little sign of life there either and the tracks looked like we had missed them earlier in the day. We headed a bit east to Lyons to get a late lunch and then a bit further east to Clyde where we waited for CSX to make up for our lackluster shortline performance, but all we got was 2 Amtrak and a UPS train before hearing Finger Lakes arrive at Lyons. We tore back to Lyons hoping to get them there, with the sun coming out for the first time in days as we went, disappearing again as we arrived. We followed the Lyons runner up to Geneva trying to get ahead of the FGLK train we knew was around, beating it to the yard at Geneva in last light. Damn these short days.