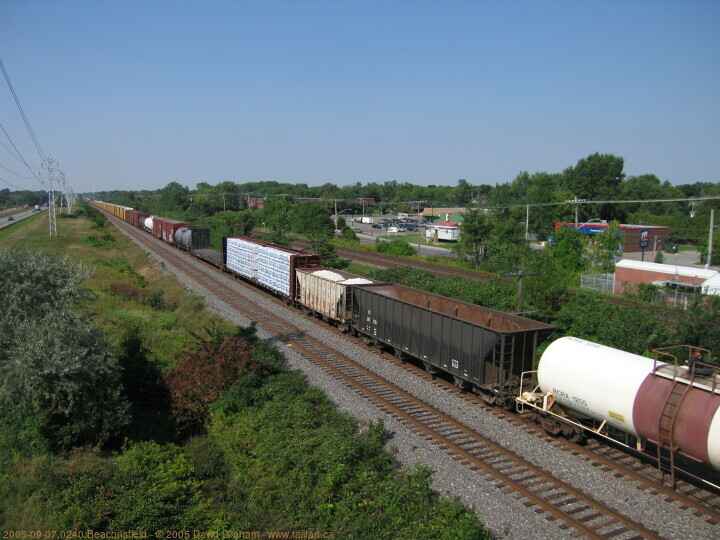 (map) My uncle used to live in Beaconsfield near the tracks. When I visited him when I was a kid I could watch the CN and CP trains go by quite often, and I learned about a pedestrian overpass there at the time. It is a great spot with a lot of traffic and CN and CP are closer in a way that is visible than anywhere else I know.

We headed from my parents' place in Quebec to Laura's parents' place in Brattleboro, Vermont via the scenic route. While Laura had a meeting in Montreal, I spent an hour on the pedestrian bridge in Beaconsfield where I caught 6 trains from 4 companies (CP, CN, AMT, Via), with one foreign unit for good measure. We went to eat on the border between the burroughs of St-Henri and Verdun in Montreal and caught a CN TankTrain unit train heading through town on our way to find food. After that, Laura and I headed to Farnham in the townships to see what Montreal, Maine, and Atlantic had to offer. We found a pair of MMA-lettered GEs switching the yard there but not too much else. From there we went across the border to St. Albans where we caught NECR train 324 leaving town. We heard it get a clearance to Milton to meet a northbound. We did beat it to Milton, but then didn't find the tracks. By the time we found the tracks, we watched the train go by from five or six cars back at the grade crossing line up and didn't try to photograph it. We then found the train it was meeting, which turned out to be a unit train of 6-bay hoppers, but we found no roads to the head end of the train.